To the fast and heartless, the 1913 natural disaster = $$$. Four authors of bestselling instant disaster books monetized misery to ring up millions in sales before the flood was even over. Ka-CHING!

A gold mine about Henry Neil a/k/a Marshall Everett amassed by the Federal government appears at this Fold 3 portal, which will get you into the declassified dossier of Judge Henry Neil.

The American Catalog 1908–1910. New York: Office of Publishers; Weekly. 1911. I was unable to find the volume for 1912–1913, but this earlier volume still answered some questions about publishers. 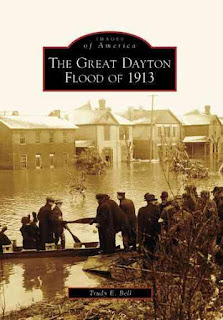 Rozario, Kevin, “’Delicious Horrors’: Mass Culture, the Red Cross, and the Appeal ofModern American Humanitarianism," American Quarterly 55 (3): 417–455, September 2003, builds a compelling case that the extraordinary rise of mass humanitarianism in the early twentieth-century was fueled by judicious use of sensationalism and pulp fiction techniques in print and other promotional media—that the display of the appalling was key to making the appeal.

White, Jay, “’God’s Ark’: Subscription Book Publishing and the Titanic,” Acadiensis 28 (2): Spring 1999. Although focused on the instant disaster books for the sinking of the Titanic, there is much history relevant to 1913, and the cast of characters is the same (including Marshall Everett. Fred S. Miller, Logan Marshall, Thomas H. Russell, plus the publishers).

Bell, Trudy E., The Great Dayton Flood of 1913, Arcadia Publishing, 2008. Picture book of nearly 200 images of the flood in Dayton, rescue efforts, recovery, and the construction of the Miami Conservancy District dry dams for flood control, including several pictures of Cox. (Author’s shameless marketing plug: Copies are available directly from me for the cover price of $21.99 plus shipping, complete with inscription of your choice; for details, e-mail me at t.e.bell@ieee.org )

How could something so enormous be nearly forgotten?


The Great Easter 1913 monumental storm system, tornadoes, and floods - the United States' virtually forgotten most widespread natural disaster - devastated the industrial north from Nebraska to the Atlantic seaboard and down the Mississippi. This blog is devoted to all aspects of the devastation that afflicted 15 states, including meteorology, rescues, philanthropy, heroism and villainy, rebuilding, and lasting legacies - highlighting the breathtaking geography and primary sources uncovered during original research since July 2003. The blog will supplement and complement articles and other references posted on the 1913 flood page of my website (http://www.trudyebell.com/1913flood.php), a page also listing upcoming talks and including an index to previous blog posts. All blog installments are Copyright 2012-2018 Trudy E. Bell unless otherwise noted; please contact me at t.e.bell@ieee.org for permission to reprint or use. Follow updates on Twitter @trudyebell